David Bastianoni’s photograph, He Will Never See His Father, is a striking image that depicts a pregnant Muslim woman holding the head of her dead husband.  She is dressed in a black Abaya, and her husband is enshrouded in an American flag. The woman is on her knees with her straight back hinged forward almost in a position of prayer as she kisses the forehead of her husband whose body lays supine on top of a gray coffin that is in front of a gray cross, the highest point in this staged image. The flagged-draped coffin as a symbol of service in the armed forces of the United States has been replaced. Instead, the red, white, and blue flag has become this Muslim soldier’s Janazah shroud. He is not wrapped in traditional white cotton for his final rite of passage. There is no coffin, no satin lining, no uniform between the man and the country for which he fought and died. 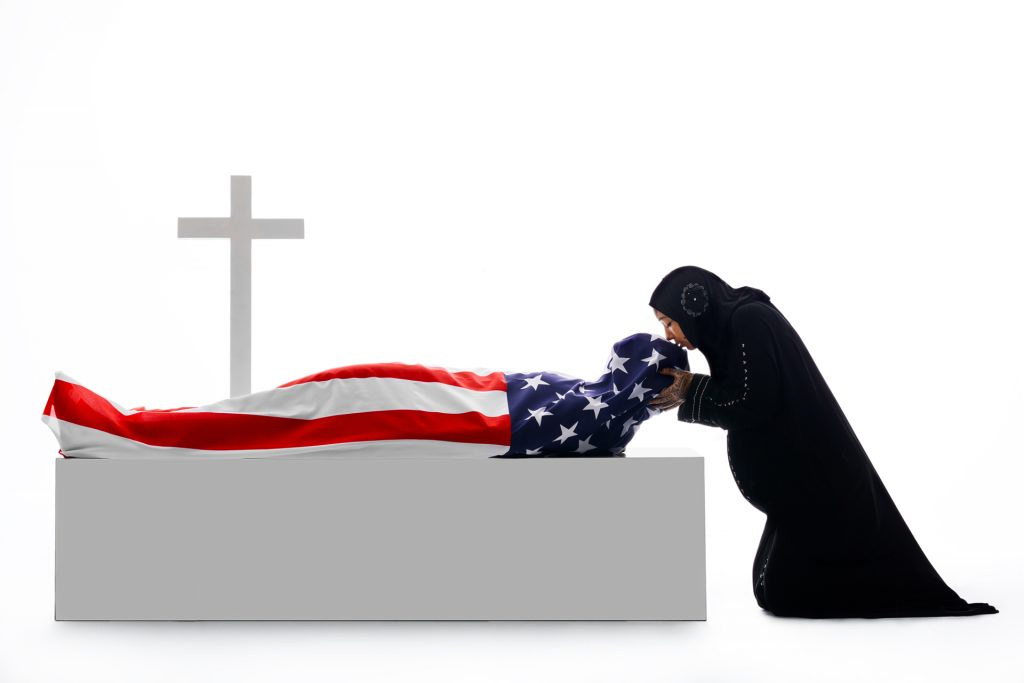 He Will Never See His Father

In addition to seeing the image as both the loss and promise of life, I see an immigrant family from Western Asia depicted with humanity in order to counter the view of Muslims as terrorists.  I see a family’s sacrifice and its display of patriotism for and assimilation into this country. The untold story -what I don’t see- creates a dissonance that resonates more powerfully in the forefront of my mind, however. The absent presence of my historical and political perspective overshadows the “photographic reality” that Bastianoni’s wants the viewer to question in order to bring additional perspectives to bear.

I am a black, African American, 60-year-old, female, native-born Muslim photographer whose ancestors were American prior to the formation of the United States. We Muslims aren’t seen as terrorists per se, we’re not seen at all.  And if we are, we are not seen as “real” Muslims.  Our sacrifice and patriotism is muted. Our assimilation is a burdensome assumption or an accusation of just being black, not American.

The red, white, and blue in this image is a mask disguising corrupt capitalism and greed as democracy, freedom, and peace  –the promise for which this soldier most likely thought he fought and died. My perspective is swift to consider that this man is dead because of this country’s invasion of Iraq, the support of the ongoing war in Syria, its presence in Afghanistan, and the drone attacks on innocent civilians.  My perspective does not easily see heroism or symbols of my safety and security.

When I look at Bastianoni’s image, the spaces are filled with invisible African American Muslims like me.  Also hidden there are the accounts of this country’s acts of terrorism against its own citizens and people all over the world. Certainly one frame cannot tell a complete story, but from the righteous to the criminal, each story that this image does contain comes from a myriad of perspectives on life, death, family, religion, citizenship, politics, and war. I suspect that the most critical story will be that of the unborn child.

He Will Never See His Father, won the Wedding and Portrait Photographer’s International (WPPI) Grand Award for 2017. The image warrants praise for its artistic quality as well as for its ability to elicit emotion including that of agitation –the true role of art as activism.

To see the image, go to: