I was in grade school when US troops were sent into Vietnam, and I was in college when the troops were withdrawn. During that time, I participated in anti-war rallies and marches with my entire family, which embodied the People’s defiance and resistance against racism and violence.  My parents gave speeches and raised funds. My brother occupied the draft board in New Rochelle, NY during a demonstration against the war, and both he and my father along with teachers and other students were arrested. Some of my sister’s friends were killed in the war. We held signs. We shouted. We locked arms and sang songs.  And like many American families, we relied on the reports from Walter Cronkite and other journalists to bring news and images of the war into our homes.

Watching the PBS series The Vietnam War more than 50 years later was like placing a missing piece into a puzzle. The stories and images not only awakened what I had forgotten, but they also helped me to see and understand much more about the war in Vietnam. Although this critical documentary leaves it to the viewer to recognize that the same American and Vietnamese war crimes, lies, and tactics are being used in the continuing wars in Western Asia, it does indeed tell the story of “What we remember. What we forgot. And what we never knew” about US troops in America’s Vietnam War. This documentary provides comprehensive multiple perspectives of a period in history that was one of the major catalysts in this country’s imperialistic campaigns, the loss of independent media, domestic militarization, the drug trade, de facto discrimination, and the shift to the political right. More importantly for me, however, this documentary–particularly the voices of the American and Vietnamese soldiers and their families–brought significance to a legal-sized manila folder that I have been holding onto for a very long time. 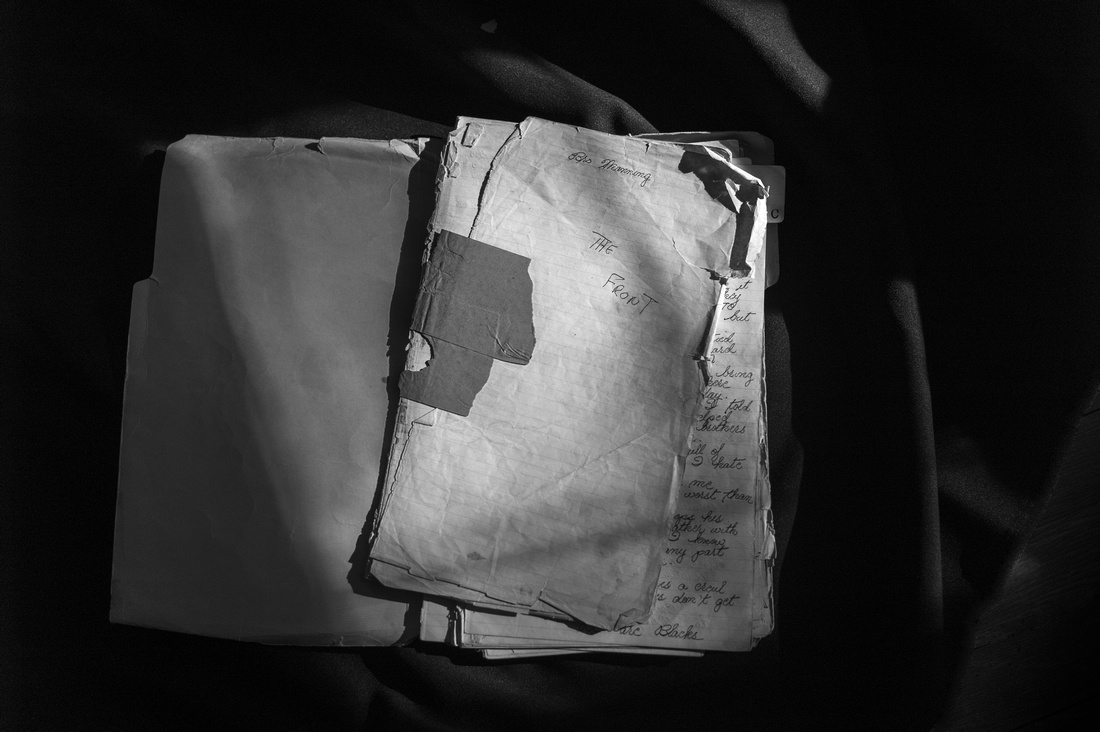 I can’t remember exactly when, but I believe it was in the late 1980’s or early 90’s when I was hosting a writer’s workshop for a local group of writers who would come to my house to read and discuss our writing–mostly poetry.  On one particular occasion, a man in the group brought a friend, a Vietnam veteran, who also brought some of his work.  I can’t remember the exchange, but this man gave me his folder.  At the end of the meeting, I tried to give it back, but he wouldn’t take it.  He wanted me to read it and hold onto it for safekeeping.  At least that’s what I recall.  His work was written in long hand from top to bottom on both sides of pages that had been torn out of a ledger that had tabs with the letters of the alphabet on them. The first page consisted of poorly articulated disjointed ideas and didn’t prompt me to read on, so I didn’t. And although I never took the time to read the rest of the pages, I did keep the folder.

Throughout the years, when I came across the folder, I would try to remember the man’s name or even the name of the man who brought him to my home.  I would flip through the pages and wonder why he left his words with me, and why he never tried to get them back. Several times I thought of discarding the folder, but I never did.  If it were my folder, I would want to keep it, and perhaps one day he might feel the same.

After a few episodes of The Vietnam War, I thought of the folder and knew exactly where to find it–carefully tucked in a bin with my old journals.  The folder and the papers it held had yellowed.  The tape that bound the fragile pages had dried, and it crumbled in my lap when I opened the cover that read: THE FRONT in all capital letters.  Bro Manning was written in elegant penmanship at the top.

I read some of the pages with different eyes. The first page was about smoking marijuana. Urbs the urbs, Dew the dew.  My brother be, you handed me something that resembles a small tree! Those urbs that VietNamese com soy (Grass). Many days and nights I sit and draw on the bowl. Bro Manning was part of the Army Airborne 173rd, and Pattie Boozer was always on his mind: This Black Queen I do care boo cooh (much) about.  I saw the names of Vietnamese cities and words like revolution, kill the pig, Uncle Tom, black power, and can you dig it? It’s Too Fucking Late was written in large letters that took up a third of one page, and journal entries were dotted with prayers: Dear Lord make me strong. Whitey hurts you worst than Sir Charles.  When Charles drops his rockets in on us I gather with my Blacks because I know Charles don’t want any part of my black brothers. Our battlefield is a cruel mother.  If Sir Charles doesn’t get you, Whitey will. Beware Blacks.  There were expressions of anger, shows of brotherhood, accounts of racism, cries for help, as well as shards of hope.

And he was not the only one who had written in the journal.  Other soldiers wrote messages to him and called him Brother Black, Big Skip, or just announced themselves: This is Theopolis J. Hall. I am a brother. I am a black man. I am Theopolis the first. I am Theopolis the last. Some were long letters with warnings, advice, and opinions. Others were short messages like those written in a yearbook.  They signed their names Bro. or Brother and included their addresses: Bro. Roosevelt Taylor from Birmingham, Alabama; Kenneth M. Calhoun from Copiague, Long Island; Vaughn Fuller from Washington, DC; and LaVonce Reed from St. Louis, Mo. Among many others. I marveled at the treasure in my hands.

The Vietnam War is a testament to the excellent research and writing of Geoffrey C. Ward and the masterful visualization of Ken Burns and Lynn Novick.  More so, it is a testament of the fortitude of those American and Vietnamese photojournalists, families, civilians, and soldiers who–with a kaleidoscope of motivations–experienced, recorded, protested, resisted, fought, lived, and died as a result of the atrocities of the Vietnam War. For me, it is also a special testament to Bro Manning who entrusted me with his piece of the puzzle. I will protect his pages and read his story. Then I will attempt to return his words. I may or may not find him or any of his brothers, but I owe it to them all as well as to myself to try.